I had some serious trouble with my arcade true type font. Because ttf only have one color, I pondered about pre rendered fonts on a bitmap sprite sheet.

Initially I liked this idea, but I like the true type font because it’s quick and resizes really nicely. But the problem is that If I wanted multicolour characters this won’t do. So what did I do? Well, I made two CCLabelTTF nodes and drew them over each other. One node as an outline and one for the fill. This worked very well, except for multiple lines…. The truetype font node shifted a pixel or so on each row. This is because of the rounding errors in the “how many text can fit in a certain box” calculation in the True Type rendering. Look at the green coloured arcade text. Its the TTF version. Some of the characters are smeared across each other and that sucks big time. So what to do then? Wrestle with bitmaps and aliasing again? No not again! 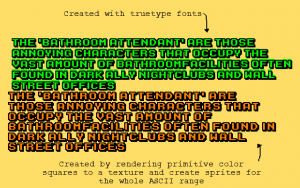 The orange coloured is drawn block for block by Cocos2D primitives rendered on a texture. A sprite for each character is created from those textures. But with this new approach I had to create the “how many text can fit in a certain box” algorithm for my solution too. Plus all the font input had to be made too, so it took me about 6 hours to make this. But this is a very important aspect of the game, so it deserves the quality it has now. On the plus side I can make lowercase characters, making the game even more authentic to the likes of Indiana Jones and the Fate of Atlantis. Another plus is memory consumption, my solution uses less memory than the TTF one. Another plus is that I also aligned every line of text in the dialogs, just because I was on it anyway.