The Search for the holy Pixel Editor

During the making of my Adventure “The Lost Adventures” I downloaded some character sprites from the internet first and used some assets from archived projects.

I edited these with Gimp, my normal workhorse for doing stuff. But they looked horrible, and It looked really like developer art, and it took too much of my time.

Gimp is good at graphics manipulation but not specifically doing well at the pixel level.

A good pixel art tool is all about zooming in out, you have to do this as often as you can.

It’s important that you can get direct feedback if your pixel you just painted looks good on the sprite as it will appear in your game this way.

An ideal device to zoom in and out quickly is pinching and zooming pixel editor. Tablet has a few drawbacks too, like selecting portions of your sprite and moving them.

I have tried lots free and non free.

Lets list some of them here (ranked from best to worst, off course after writing this post, some apps can be improved in the meantime):

Making save games is one of the most critical parts of an adventure game. I had a simple ‘save the game when you exit the room’ procedure before I created this. This was sufficient for a while, but I needed more flexibility. The player will b 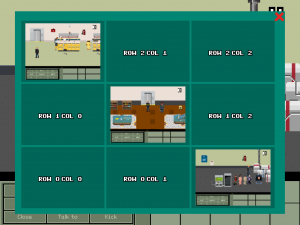 e able to save the game at any time anyway. I have created a draft interface for making save-games. It will definitely be more polished in the future, but I wanted to get this thing coded. I need this badly for testing all the rooms, because it’s more convenient to load certain states by specially prepped save-games. As you can see it shows a small thumbnail scaled down but still pixelated when you click what I call a save-slot. A descriptive date will be shown on the thumbnail so the player knows exactly when he saved it. Players can add a title when they want to. This is not in the game right now. but these features will be in it. As you can see, I can play tic-tac-toe with this screen. So it’s now a game within a game!

I have a lot of rooms (about 10 rooms for each Act) There will be around 40 in total. I need to be able to switch really quick to test them. It’s a typical smorgasbord of buttons to do just that. Such a ‘switch’ screen will not be in the game because that would break the immersion of the game. 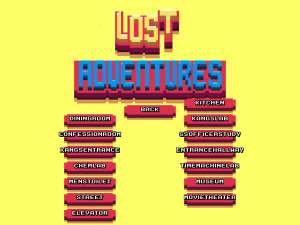 I really wanted to make this ‘real’ transition room quickly, because it can be part of the game. It is a shown in a special way because it is projected from the side completely. The only thing Dave can do is press the buttons. Depending on the floor the speed of the transition is faster when the floor destination is farther from the current floor. Lang’s building is very futuristic, so such a turbo lift could be expected. The elevator is what I expected too be, I had made the art in pieces long before I made the movement so It was really coding all the movement. A lua script is driving the animation as all the other rooms.

Still, this is all not set in stone because I am not convinced the player should see the buttons all the time. I could centre the buttons when the player activates the panel and show some stuff buried in the concrete. The elevator created a new puzzle for the adventure, getting an elevator pass…

The elevator above is an animated gif so click the preview thumbnail to look at it. It’s quite hypnotic…!

Animated Gif of the Angry Guard and status development

It really looks if he is about to beat you up!

The Lost Adventures engine is almost feature complete and I am about to leave pre-production. There will probably missing some features, but they are not necessary for the main story and adventure gameplay.

The adventure engine has the following features :